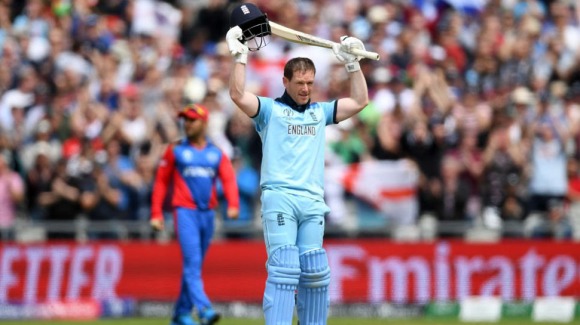 The BBC talked about the Magnificent Morgan Maxims (M cubes) versus Afghanistan. Eion Morgan, England’s captain hit a stunning 17 sixes in his 140plus off just 70plus balls to take his team to almost 400 when they batted first in their World Cup 2019 game vs the Afghans. He became the first player in ODI history to reach a 100 hundred with just sixes alone (17 x 6 is 102!). When Morgan batted the spectators became fielders (who fielded his huge sixes) and fielders became spectators (as they watch ball after ball, hit by Morgan, go over them). Fielders are placed to stop the runs. But when you hit huge sixes, the fielders become irrelevant.

In our Christian walk, there are many ‘fielders’ placed by Satan to stop us. Fielders like the World, the Flesh, the Little Devils, False Teachers and their teaching. But when we are full of the Holy Spirit and the Word of God we make these fielders ‘irrelevant’. We pole-vault over these fielders enabled by the Spirit of God (Rom. 8:13) and swinging the bat of God’s Word in our heart (Psa. 119:9,11).

(Duke Jeyaraj is the founder of Grabbing the Google Gen from Gehenna Mission, the G4 Mission. This is a listener-supported Indian ministry. Find out more at www.dukev.org. You may choose to like Duke’s facebook ministry page at www.facebook.com/dukebook. You may choose to subscribe to Duke’s youtube channel at www.youtube.com/visitduke).

Duke Jeyaraj was born to missionary parents in Vellore, South India and was saved at the age of 11 and committed for ministry and received the Holy Spirit Baptism at the age of 13. God opened the door for him to preach first as a school boy at the age of 16. He is a trained Agricultural Engineer [B. Tech from SHIATS, Allahabad, India], who did not pursue a career in the line of his education but nevertheless enjoys growing cacti in the balcony of his rented Chennai flat, during his spare time! He could have been a sports commentator but prefers to wrap Bible Truth around sports magic moments and other interesting-to-Google Genners contemporary events. God’s call upon him made him utterly restless and he obeyed that call to by founding the Grabbing the Google Generation from Gehenna Mission (G4 Mission) in 2006 to finally find serenity after having served as a International Bank Customer Service Executive/Youth Pastor/Bible College Teacher/Missionary/Youth Mag Editor. G4 Mission is not a church but an inter-denominational ministry to present-day people, a ministry which Duke works full time for, as an itinerant presenter/preacher/writer-at-residence since 2008 along with his wife, putting to use the formal theological training he received from Southern Asia Bible College in Bangalore-India [M. Div - a Gold Medal performance in 2001 & Doctor of Ministry - with project on Making Disciples of Modern Young Working Professionals Among India's Google Generation, World-wide]. Several Christian publications have carried Duke's articles over the years and at present Aim Magazine (the voice of  the Evangelical Fellowship of India an umbrella body of over 65,000 Indian churches/organisations), regularly carries Duke's writings. Duke's Bible-teaching book on Sex, Love, Marriage, Porn and more called, Straight Talk, is presently available on Amazon and Google Books.  Duke has preached by invitation beyond his national borders (we are talking about nations such as Bangladesh, Singapore, Germany, Nepal and the United Arab Emirates). Duke is called a 'Reverend' by a leading denomination (even as his ministry remains indepedent and inter-church).  Duke is called ‘dad’ by Dale (now a St. Stephen's Delhi student) and Datasha (now in Class 9) and ‘hubby’ by Evangelin (the daughter of a missionary couple to Odisha who is a hospital admin grad currently studying M. A. in Biblical Studies with SAIACS Bangalore) and calls Chennai, India, his current home after living in Hyderabad till June 2021. In case your curiosity is triggered by hearing all this, you may checkout www.dukewords.com [if you are the reading plain text type], www.soundcloud.com/shoutaloud [if you are part of the audio-listening tribe] and www.youtube.com/visitduke [if you group yourself with the video-steaming generation])