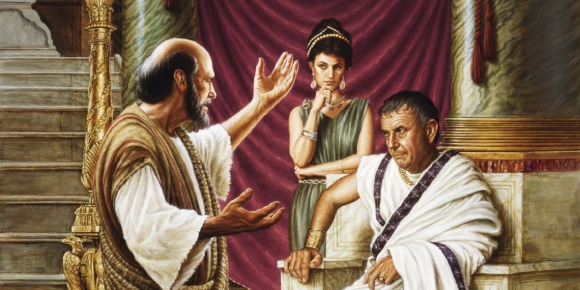 Paul kept in custody meets Felix, the ruler. Felix has a vacuum which is tries to fill with three things:

1. Honey – his vacuum he filled with his newly-acquired honey named “Drusilla” (Acts 24:24). Druscilla was not a single girl from Brasilia! She was an already-married woman Felix stole and made his wife. You think if you have that girl, that boy in your life, life will be meaningful and happy. You are wrong. Life’s purpose cannot be found in the discovery of any human.

2. Money – While the ‘judgment’ messages of Paul (Acts 24:25) put him off, Felix was after a possible ‘payment’ which Paul could have given (a bribe). But Paul did not budge. After he won the US Open, Pat Rafter said, “When I did not have it – I wanted it. Now that I have it – I do not want it!” US Open offers the biggest prize money among the Grand Slams in Tennis.  Money cannot fill the vacuum in your heart.

3. Popularity – To ensure that would  continue to be a popular ruler in a Jews-dominated area he continuted to keep Paul, who was perceived as an enemy of the Jews as he was the preacher to the Gentiles, in lockup (Acts 24:26).  After he won another edition of the World Formula One Championships, the greatly popular Michael Shumi said, “I am empty. I am exhausted.” Popularity can never plug the vacuum in your heart. Popular Amitabh Bachan talked about the fear of not being recognized in one of his interviews.

But honey, money and popularity will not plug the vacuum in your heart. Only Jesus – the only sinless one – can! Sin causes the vacuum in the soul and only Jesus did not have that vacuum. And he went to the Cross to shed his blood. From his shed blood a door for forgiveness of sins is opened. When we repent from sin and trust in the living Jesus our sins will be forgiven and the vacuum in the heart will be gone!!!! Why are you still waiting to do that?

(Duke Jeyaraj is the founder of Grabbing the Google Gen from Gehenna Mission, the G4 Mission. Find out more at http://www.dukev.org.)

Duke Jeyaraj was born to missionary parents in Vellore, South India and was saved at the age of 11 and committed for ministry and received the Holy Spirit Baptism at the age of 13. God opened the door for him to preach first as a school boy at the age of 16. He is a trained Agricultural Engineer [B. Tech from SHIATS, Allahabad, India], who did not pursue a career in the line of his education but nevertheless enjoys growing cacti in the balcony of his rented Chennai flat, during his spare time! He could have been a sports commentator but prefers to wrap Bible Truth around sports magic moments and other interesting-to-Google Genners contemporary events. God’s call upon him made him utterly restless and he obeyed that call to by founding the Grabbing the Google Generation from Gehenna Mission (G4 Mission) in 2006 to finally find serenity after having served as a International Bank Customer Service Executive/Youth Pastor/Bible College Teacher/Missionary/Youth Mag Editor. G4 Mission is not a church but an inter-denominational ministry to present-day people, a ministry which Duke works full time for, as an itinerant presenter/preacher/writer-at-residence since 2008 along with his wife, putting to use the formal theological training he received from Southern Asia Bible College in Bangalore-India [M. Div - a Gold Medal performance in 2001 & Doctor of Ministry - with project on Making Disciples of Modern Young Working Professionals Among India's Google Generation, World-wide]. Several Christian publications have carried Duke's articles over the years and at present Aim Magazine (the voice of  the Evangelical Fellowship of India an umbrella body of over 65,000 Indian churches/organisations), regularly carries Duke's writings. Duke's Bible-teaching book on Sex, Love, Marriage, Porn and more called, Straight Talk, is presently available on Amazon and Google Books.  Duke has preached by invitation beyond his national borders (we are talking about nations such as Bangladesh, Singapore, Germany, Nepal and the United Arab Emirates). Duke is called a 'Reverend' by a leading denomination (even as his ministry remains indepedent and inter-church).  Duke is called ‘dad’ by Dale (now a St. Stephen's Delhi student) and Datasha (now in Class 9) and ‘hubby’ by Evangelin (the daughter of a missionary couple to Odisha who is a hospital admin grad currently studying M. A. in Biblical Studies with SAIACS Bangalore) and calls Chennai, India, his current home after living in Hyderabad till June 2021. In case your curiosity is triggered by hearing all this, you may checkout www.dukewords.com [if you are the reading plain text type], www.soundcloud.com/shoutaloud [if you are part of the audio-listening tribe] and www.youtube.com/visitduke [if you group yourself with the video-steaming generation])